What do you see? A kind face, a gentle man with a radiant smile?

When you see this man what do you see? A bum? Someone who has wasted their life, addicted to drugs? 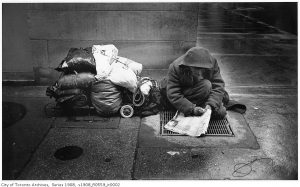 Which of these men would you trust? Who would you leave your son or daughter with?

Suspend your judgement for a moment and listen.

Listen to their story.

Listen to their whole story.

Listen to their whole story first.

Suspend your judgement until you have.

The first man, the kind looking gentleman—his is the face of evil, the source of immeasurable shame, suffering and pain. Did you see it?

The other man is a person destroyed by trauma, an act of evil committed against him when he was a child. Did you see it or were you so afraid and repulsed that you didn’t stop for a moment?

Who would you trust now?

As I sat in the back row of an empty tram in Adelaide the derelict boarded. A dishevelled, unshaven, filthy man carrying a small backpack. As he boarded his eyes locked onto mine.

He took decisive strides towards me.

Please don’t sit near me.

But he did, right next to me.

He was looking for conversation. He is studying ‘human ion transfer’. His mind filled with conspiracy theories. The government is tracking him because he has uncovered their secrets, secrets of how they control the population.

“I smoke a far bit of pot you know,” said Anthony.

He left school in Year 7.

He’s been living on the streets for years, travelling from place to place to study ‘human ion transfer’.

What happened to this man that he never finished school, that he became addicted to pot?

I look into his eyes, beyond the manic behaviour and see the deep sadness he carries. But as I see it, that hollow emptiness where joy once resided, my reaction is “mingled with a wonder and awe at how hard humans everywhere try to live, even when their days were so very difficult, even when their circumstances were so wretched” (A Little Life).

I see in this man the same I see in the lives of so many others I have met. The impact of trauma on a child; trauma that permanently altered their path to a life filled with joy and flourishing.

I have seen what happens when a child is robbed of their innocence. When the evil selfish desires of an adult manifests itself as a heinous crime against life itself.

I have seen what happens when a person is robbed of their willingness to trust others, their deep human need to be in relationship with each other and with their creator.

Listen to the whole story.

Trust in the goodness of humanity, but more so, trust in the Grace of God.

Life can so sad, and yet we all do it. We all cling to it; we all search for something to give us solace.

Christ is the only place we can find it.