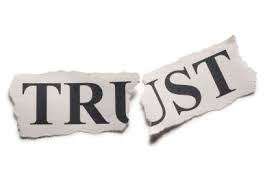 The relationship between two colleagues is on the brink of all-out war. It once was a productive and mutually respectful relationship. Both worked collaboratively on projects. The conversations extended to each other’s personal lives. It isn’t like that now.

Trust can be broken in an instant, fracturing what was a healthy relationship. Tensions emerge. These tensions may be subtle, but they can spiral rapidly into toxicity.

We often only notice trust when it is missing. What is certain is that once trust is damaged it has a negative impact on work ethic, output and people’s wellbeing.

Trust can be broken in many ways. I have experienced broken trust. I am struggling to trust someone because I know that they really don’t care for me. I am a means to an end for them. For others trust is broken when confidences are breached, if they aren’t consulted on matters that impact their work, or they know their views are really listened to.

Having experienced broken trust from both sides of the fence I have been reflecting on how it can be restored. In his book, “The Speed of Trust”, Covey argues that you can regain trust once it is lost. I agree with him but it is exceedingly hard.

Once trust is lost our natural instinct is to sever all ties, if that is possible. We vow never to trust that person again. Sometimes our instinct is more spiteful, we want revenge. We seek ways to get back at the person, to make them to feel the same humiliation we have. Sadly, this path, while seemingly the easiest, leads to bitterness, pain and destruction.

Unfortunately we believe that the path back to trust is the one where the culprit apologises. In the case of broken trust in a leadership relationship this entails the leader genuinely owning their actions, taking responsibility for them, apologising and seeking to make right what they did wrong.

It takes enormous humility for a leader to admit their mistakes. It requires the leader to forgo some of their power, their status and acknowledge that they were wrong. This rarely happens in leadership but Collins (Good to Great, 2001) asserts that it is possible to be humble, iron-willed and successful.

“without the shedding of blood there is no forgiveness” Hebrews 9:22

But, to restore trust this action, as noble as it is, isn’t enough. Trust is a socially constructed phenomenon. It only occurs when a relationship exists between people.

Both parties bring something to a trusting relationship. The leader has to act in a trustworthy manner, and the follower has to accept their actions and give them their trust. It is a mutual agreement.

Forgiveness is equally difficult to do, particularly when there has been deep pain caused. It also takes great humility. But trust will never be restored unless the other party is willing to accept the apology and let go of their pain. While a much harder road than retribution, this path does lead to healing and peace.

Only with effort on the part of both parties can trust be restored.